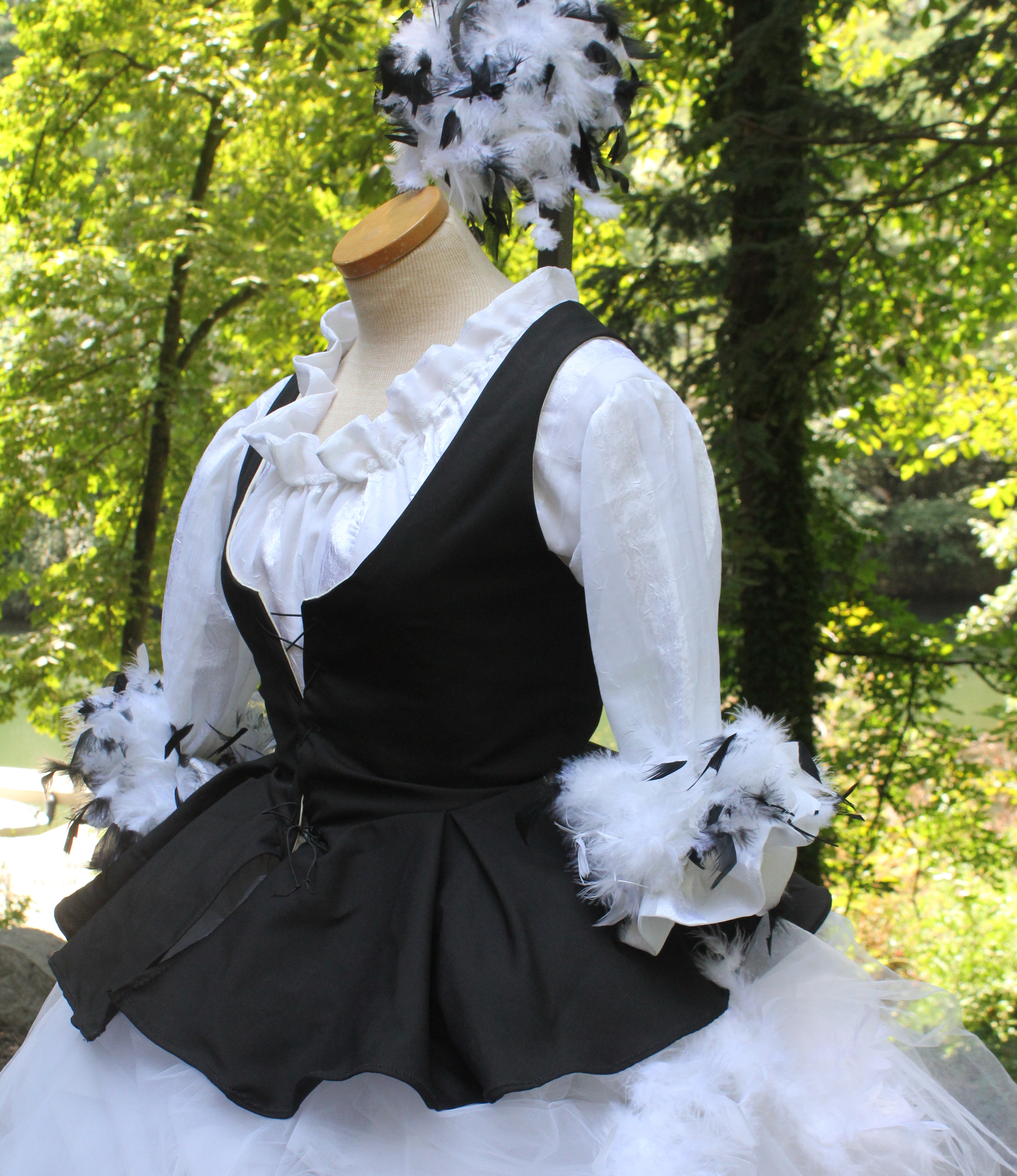 As I promised last week in my post on Lumiere, today I’m going to cover Babette’s feather duster costume.

As far as looks go, I was happy with the way it turned out, but when it comes to the wear and tear of theater, it did NOT hold up at all. So there’s definitely some things I’d change if I went back and did it again. (We’ll get to that later.)

Just like Lumiere, Cogsworth, and the rest of the palace staff, Babette needed a costume that not only transformed her into a household object, but also allowed her to change quickly into a human again at the end of the play.

I spent some time scrolling through internet images from other theater productions, and noticed that Babette was usually done in one of two ways. Either with a short, flirty skirt, or a long, slender skirt (mimicking the duster handle), with feathers at the bottom.

Neither of those were good options for me. The short, sexy version was NOT what I wanted for a kid’s production (or any production, to be honest; sexy is not my style). And the pencil skirt style, though a good feather-duster imitation, did not fit the historically-inspired look I was going for.

However as I’ve mentioned in several other costume posts, I am absolutely in love with the FANTASTIC costumes Jaqueline Durran created for the 2017 live action Beauty and the Beast.

In this case, it was actually the human version of the character that caught my attention. Right after the spell is broken and the palace staff become human again, the feather duster (called “Plumette” in the movie) is seen in the costume below, which cleverly captures the proper historical silhouette while using fluffy fabrics and a few feathers to hint at her previous feather-duster existence.

I decided to go for a similar silhouette, though I wanted to incorporate more of the traditional black and white color-scheme. My idea was to have a fluffy, “feather-duster” over-skirt that could be removed quickly to reveal the human maid costume underneath.

I was hoping to find a rich, black brocade fabric, but had to settle for some plain black garment fabric ($5), which was all I could find at the thrift store. For the white, blouse-style “chemise” worn as the base layer, I used a white curtain panel ($2) that was the same style (and bought at the same thrift store) as the sheer panels I used for the “Bimbette” skirts.

Originally my plan for the feather-duster skirt was to use a lot of fluffy tulle mixed with feathers. I thought I’d need to buy a used wedding dress for the tulle, but I was blessed (and shocked) to find an ENTIRE BOLT of white tulle at the thrift store for only $6!!!

When it came to buying feathers, I at first intended to order loose ostrich plumes, but found out they were quite pricey. So I ended up just getting cheap boas from my local dollar store, which were much simpler to attach anyway (I got 10 of them for $1 a piece). For the apron, I found a second-hand, lace-edged table runner for $0.50. I also bought second-hand shoes, and dressed them up black electrical with tape and buckles! All in all, I only spent about $25 on the entire costume.

I love making magical creations with just a few dollars and lots of creativity!

The base layer of the dress was made similarly to Belle’s blue dress and the Silly Girl costumes. Basically the top half was a shortened version of the “chemise” pattern in this book, and then the black skirt fabric was attached to at waist level. (For more details, check out the post on Belle’s dress).

The only things I did differently from Belle and the Bimbettes was to cut each sleeve all in one piece, rather than with the square underarm gusset (since I was working with a striped fabric this time), and added a wide ruffle around the neckline instead of lace. Oh! I also lined the torso area this time, since the curtain fabric was quite transparent.

The black bodice was made using the same period-correct french bodice pattern I used for Belle and the Silly girls, but this time I added a peplum to the bottom of it, to smooth the transition from feathers to bodice. I basically cut out a doughnut-shaped piece of fabric and attached it to the bottom of the bodice, pulling in the fullness with box pleats. I used the same elastic cording (this time in black) that I used to lace the Silly Girl costumes.

The last piece in the standard maid outfit was the apron, which I made by cutting the table-runner in half and using some hem tape to make the waistband and ties like I did for Belle’s apron. (I saved the other half of the runner for Mrs. Potts’ costume.)

Now it was time for the fluffy part! I started with a simple white skirt made out of some scrap fabric. It was pretty basic, just a casing and some elastic around the waist. Then I pulled out the bolt of tulle and tried to figure out how to attach it.

I wanted a somewhat random, fluffy mess. Nothing with recognizable layers or seams. To do that, I knew I needed to be able to work from the outside of the skirt, where I could see how the tulle was behaving as I tacked it in place. At first I considered pinning it, and then going back and stitching all the places I pinned. But that seamed like a long process, and I was in a hurry. So…I used a stapler.

Starting from the top of the skirt, I wrapped the tulle around and around, bunching it up and stapling it in place. By the time I got to bottom (and ran out of tulle) I had a fantastical poof of a skirt quite unlike anything I had made before!

I originally planned to use boas with mixed black and white feathers, but they were more expensive and had to be ordered online. So I ended up just going with ten plain white ones from the local dollar store. I draped them around, bunching and stapling just like with the tulle. After I finished, I was actually glad I had gone with white, because it all blended together and just made the skirt into a fluffy, feathery poof. Black feathers would have stood out more, and you could have easily seen where they were (and also that there were places without them).

The theater did have one black&white boa left over from another show, which I used to make feathery accent pieces for the actress to wear on her cuffs and head. I coiled pieces of the boa around elastic bands and sewed them down where they overlapped. This allowed them to stretch a bit for taking on and off.

For shoes, I found a pair of black high-rise pumps, and added some buckles, held on by “straps” of black electrical tape. (The buckles were ordered in bulk for the show.) I used a similar technique to do shoes for the Prince/Beast and Lumiere as well.

Watching Babette’s costume take shape was exciting. The tulle and feathers were fun to work with, and the entire process was quick. I did run into problems during the show though, which I’ll get to in the next section.

Finished Costume (and what I’d do different)

Over all I was very happy with the way Babette’s costume ended up looking. I just wasn’t too happy with how it behaved. (Or in other words, the feather skirt did not hold together well.)

Above you can see how the maid costume looks in it’s “human” form. And below, the “feather-duster” version. Looks great, right? But there was a problem…

Though it seemed sturdy enough hanging on my mannequin, the actual wear and tear of being walked around in, danced in, etc, quickly proved staples could NOT stand up to such use. All through rehearsals and backstage between scenes during performance, I was following Babette around with a stapler and re-tacking loose boas and dangling bits of tulle. The skirt swished around and looked lovely onstage…but only so long as I could keep ahead of it falling apart!

If I had it to do all over again, I would either find a more secure way to tack it, or change the design so that it was more like the skirt in the movie, which seems to be lots of smaller pieces all attached near the waist, rather than one long piece bunched and tacked everywhere.

Other than that issue though, the costume worked well. It was easy to transition from feather-duster to human, and the transparent, striped fabric I used for the chemise gave the sleeves a frothy, feminine look that blended well with the feathery vibe

I also loved the feather cuffs and headband I made, particularly with the black and white tones mixed together.

Despite the bad performance of the staples, I was still quite pleased with how this costume turned out. With a a sturdier construction, it would have been just about perfect. Maybe someday I’ll have a chance to do another version, and work out those kinks.

Stay tuned for another costume post next! (I’m planning to write about my version Cogsworth, and how I created a giant clock costume with an actual moving pendulum for him to wear!)